skip to main | skip to sidebar

Body Image and the NYNO Woman

Okay, so I was curious....how do NYNO (that is, Not Young Not Old) women in British Columbia feel about their body image at this point in life. What do they feel worst and best about? Would they consider cosmetic surgery? I surveyed my Focus Group of Women 40 and up, and was surprised (and pleased) with the findings. For example, 25% of women in the survey (of women mostly in their 50s and 60s) chose their face as their best body part, and another 25% chose their "whole body." I loved hearing this. Over 40% said they would not choose plastic surgery, but prefer to let nature take its course. Fifteen percent said they would  definitely consider plastic surgery and the largest group, 45%, said it would depend...with the most commonly mentioned procedure they would consider having done being eyelid surgery (which I've been told by an expert is a "simple procedure" provided you choose a surgeon who knows what he or she is doing!)
The part of her body that most annoys the NYNO woman seemed to be, overwhelmingly, her thickening midriff, which one woman described as "a monster house on a small lot!"
Other parts women rail against included upper arms, and saggy skin, but a good 15%  chose "none," that is, NO disliked part, also a cause for celebration, in my mind. Additional "best" or favourite body parts included legs, hair, breasts, and skin.
Overall, NYNO women here in BC seem to be pretty darn content with their changing body image, and I think that's both reaffirming and healthy. Btw, talking to someone in the surgical field in New York, I was told that, after years of observation, she found that the plastic surgery with the biggest "happiness ever after" rate was breast reduction, which, literally, takes such a load off some women's shoulders (and backs). A plastic surgeon in Victoria told me it was abdominoplasty (that is, surgically removing excess skin, usually after big weight loss) that gave him as a surgeon the greatest satisfaction.
He also told me (which was eye opening to me) that he refuses to do 20-25% of the cosmetic procedures people ask him to perform, basically because he feels the result may not look right or it's not appropriate. That sort of honesty is what we should look for if and when any of us consider cosmetic surgery, in my book. In the meantime,
here's to the confident NYNO woman enjoying her active lifestyle in BC...and smiling all the way!

A Piazza of Learning for young and old

Posted by Star Weiss at 8:39 AM No comments:

Can Mindfulness Meditation slow the onset of Dementia?

It seems to me that half the world (at least my world) is anxious to find ways to slow or avoid dementia, as we all march towards those "at risk" older years of our lives, or are concerned about our parents and others we care about who are already elderly.

So, it was with keen interest that I learned of Dr. Colette Smart's study at the University of Victoria focusing on the subject of dementia from a rather creative (at least in my mind!) point of view. Can applying the techniques of Mindfulness Meditation actually affect our brains as we age, and, hopefully, actually slow or halt possible dementia in the elderly? What a shocking premise....and it's exactly the hypothesis that Dr. Smart and her colleagues at UVic are examining in a study underway this spring of 2012.

I heard Dr. Smart speak on Mindfulness Meditation: A New Frontier in Dementia Prevention and Intervention at a UVic colloquium this spring and interviewed her later about her work as a neuropsychologist whose interest is in "self-regulation and cognitive rehabilitation" with a focus on applying contemplative (i.e. meditation) practice to facilitate brain recovery, or, in the case of dementia, to ward off decline. Her current study includes a control group of older adults who feel everything is functioning as usual in their brains and a second group who have self-identified as "cognitive complainers", i.e. those who feel they are "losing it" as far as remembering things, etc. and who may indeed be headed towards dementia.

Each group is divided in half and then exposed to either the techniques of mindfulness meditation (or learning how to pay attention to the present more completely and let go of certain anxieties) or to more traditional psychoeducation techniques (like studying the different types of memory and how to address decline in various areas). In a few months, when the study is completed, I'm anxious to hear the results! The participants have brain scans and other measurable markers (through tests, etc) done before and after the study.....so we'll hopefully learn if the meditation is effective, and really does result in new brain growth (through neuroplasticity). Pretty exciting stuff and can't wait to hear more in the future!

Learning about our plastic, trainable brains 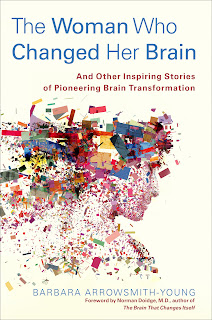 I've only recently become aware of the concept of neuroplasticity, that is, the now scientifically-accepted principle that we can indeed change or train our brains throughout our lives, and target areas of weakness to respond to specific "exercises." Through careful application of various forms of brain training, we can develop, build up, or actually  "change" our brains.
Wow. What an idea....still too soon to see how it may apply precisely to conditions such as dementia, but one person who has been proving that this sort of brain exercise works for people (especially kids) with learning disabilities is educator Barbara Arrowsmith-Young. Barbara was born with profound "learning disabilities"and in her 20's discovered ways to work on her areas of weakness (for example, she could never tell time before she started training her brain to do so).

Now, 30-some years later, Barbara's Arrowsmith Program of exercises targeting 19 cognitive defects in various areas of the brain, is used in more than 30 school settings in North America, including her flagship Arrowsmith School in Toronto.
And the world will hear more about this with the release this month of Barbara's book The Woman Who Changed Her Brain, And Other Inspiring Stories of Pioneering Brain Transformation. I interviewed Barbara about her work and her book for my Not Young Not Old column
(it should be posted there by May 7, 2012) and was fascinated by the work she is doing, and the discoveries she's made along the way. Barbara's vision is for all school children to be assessed in the early years of their schooling, using tests she's developed, so they can get help then and not have to go through years of struggle and low self-esteem the way she did.
Barbara will be at the Fairmount Hotel in Vancouver at 7 p.m. on May 24, 2012 talking about her work and her book....no doubt this will be a thought-provoking evening.

Posted by Star Weiss at 2:17 PM No comments:

Star Weiss
British Columbia, Canada
I'm a journalist who is particularly interested in the issues facing the Sandwich Generation (I think of us as the NEE-nohs (NYNO)...Not Young Not Old. I'm also fascinated by the power of place and the ways we seek the "sacred" in our lives on the West Coast. www.starweiss.ca